All news
03 February 2021
by Laura Käis
Share this article:

Despite living in the smart-grid era, the worldwide inspection and analysis of power grids are still widely carried out via inaccurate, hazardous, and time-consuming manual methods. Line workers must embark on hazardous daily journeys to potentially risky work environments. Hepta Airborne, the Estonian AI-driven technology company, aims to make this process faster, safer, and more efficient. Today, Hepta Airborne announced that it had raised €2 million in funding.

Hepta Airborne automates the analysis of power lines by utilizing drones, helicopters, satellites, and big data analysis. The company offers a full service, from gathering the data to analyzing it. All sensor data is delivered in a single software environment built by Hepta Airborne, called “uBird”. The uBird software can automatically detect defects in power lines and other infrastructure from sensor data.

Hepta’s CEO Henri Klemmer has said that their solutions increase the accuracy of defect detection by more than 33% compared to conventional methods. “This means that our software discovers more faults. The “uBird” software turns more than 250 km of power line data into actionable end-results in 5 minutes. It takes a single engineer 30 days to do the same, manually. On occasion, we have reached 400% increased accuracy, finding hundreds of faults more per single power line than conventional methods,” clarified Henri.

Power outages are also a problem to which energy companies are trying to find a faster and more efficient solution. Hepta drones can fly in a strong wind – 20 meters per second and stronger. Hepta’s drones have two particular strengths, their wind resistance is strong, and they can fly up to three hours at a time with the necessary payload.

The company also has long-term plans for the creation of digital twins for a variety of infrastructures. “In 2021, we will include humidity, soil, and weather information to our algorithms to simulate real-life conditions in the digital environment. We will predict future scenarios and potential accidents,” said Klemmer. “Our journey will lead to the creation of digital twins in multiple industries – power lines, gas pipelines, railways, the telecommunication sector, and so forth. Imagine a world where you obtain an instant assessment of the physical condition of every three-dimensional asset around you.”

Bartek Gola, a Managing Partner at SpeedUp Energy Innovation, said that SpeedUp foresees an increase in the demand for the automation of power line inspection in the upcoming years; and Hepta plans to continue to be the leader of this rising market. “When people talk about ‘energy transition,’ one tends to think that it mainly applies to renewable energy. That is, of course, correct but not comprehensive enough. Despite new production methods, there is a vast digitalization in other areas of the energy business. Globally, there are 100 million kilometers of power lines, and 97% of them are being inspected manually! There is space for digital disruption, and this is the area of Hepta’s expertise. They can automate the process of power line inspections and data analysis based on machine learning,” said Gola.

Łukasz Skarka, Head of CEE Investments EIT InnoEnergy Central Europe, said “Hepta has created an innovative and sustainable technology for infrastructure monitoring, which is carried out with drones. According to our thorough market and client studies, we believe that there is a strong necessity for Hepta Airborne’s technological and business solutions in Europe and other parts of the world.”

Hepta’s CEO Henri Klemmer agrees that investment with a great network of contacts gives Hepta a chance to enter other European countries even more vigorously. Allowing Hepta to help increase the efficiency of utility inspection in these target countries by more than ten times.

Raido Pikkar, a Managing Partner at Thorgate Group, concludes the topic best, however: “One characteristic distinguishes successful entrepreneurs from the ones who end up not succeeding. It’s grit. The second thing is asking for help when you need it. I am happy to be on board as an investor, but also as a longtime advisor to Henri,” summarized Pikkar.

Founded in 2017 by Henri Klemmer, Siim Maripuu, and Siim Heering, Hepta provides end-to-end inspection and analysis tools to automate power grid management. Its software provides a birds-eye view of the grid, and Hepta’s autonomous drones deliver best-in-class quality for hundreds of kilometers. The company currently employs 35 people and Hepta can be found in Estonia, Germany, Portugal, Finland, and Ukraine. 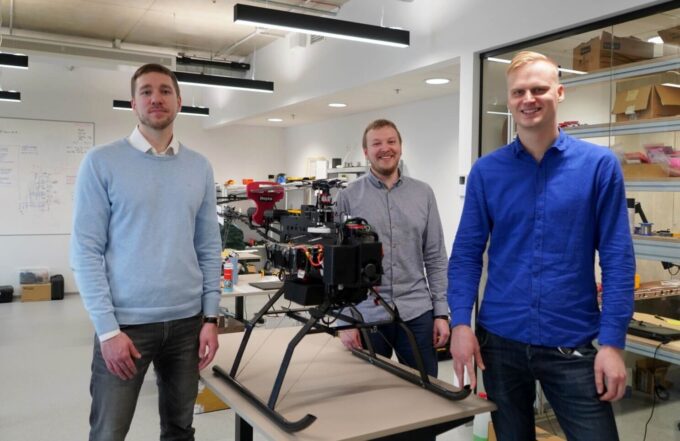